ALL YOUR TEXT-BASE ARE BELONG TO US

I was thinking about some T-shirt designs this weekend, and one train of thought derailed into the following diversion. Enjoy. 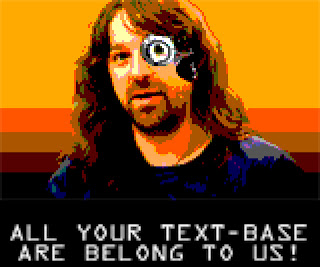 Background: A couple of months ago, Greg Stein announced his intent to return to Subversion development, among other things. Since then, Greg's been undertaking a beast of a task: redesigning Subversion's working copy management library. As for the "All your base…" stuff, see Wikipedia's "All Your Base" page for more on what that's all about.

Greg: sorry, buddy, I couldn't help myself. Glad to have you back.

Posted by C. Michael Pilato at 9:14 AM No comments:

My five-year-old son, Gavin, just came upstairs to my office — a pint-sized bundle of tornadoesque energy and noise. Today "the good guys" and "the bad guys" are flying fighter jets (which look, ironically, exactly like the ASL handshape for "I love you"). Now, I'm still not terribly comfortable with my kids embracing imaginative play involving weapons. On the one hand, I know that boys — especially at my boys' ages, and unlike their female counterparts — need rough and tumble play with strong male role models as part of proper gender identification. On the other hand, I don't want my little guys desensitized to unnecessary or unlawful violence (though I'm fighting an uphill battle against the entirety of mainstream media in this, it seems). So I decided to interrogate Gavin about his play today.

"What makes the Bad Guys bad?" I asked.

"The Bad Guys are the ones doing bad things, Daddy."

"Okay, but sometimes you do bad things, too. So do I. So does Mommy. So do your Good Guys, I'm sure."

"But my Bad Guys are the ones with the guns."

"Your Good Guys have guns, too, though. I dunno, Buddy — I can't see any difference between your Good Guys and your Bad Guys."

At this, Gavin paused. You could almost smell the grease in his mental gears as they warmed into steady rotation. Finally, he asserted, "But the Bad Guys are using their guns to hurt other people, and the Good Guys are trying to help those people." 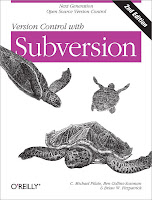 My wife's computer is now running Ubuntu Linux 8.04 (hardy heron). She no longer has any dependency on Microsoft software. I didn't think it was possible, but I might have fallen just a little bit more in love with her.

Actually, the sad truth is that for now I'm the one that still has a couple of Windows dependencies. (Those would be easily remedied by a conversion to Apple products, but that's never struck me as worthwhile maneuver.) I maintain a personal wiki page that tracks the pieces of software I need to be available (and not awful) on Linux before my dependency is broken, and over the years progress has been steadily made in that space. So, if you're a FOSS junky and you work on multi-track audio software, multi-track video editing software, DVD authoring software, or a good Microsoft Money/Quicken clone, you have my undivided attention! 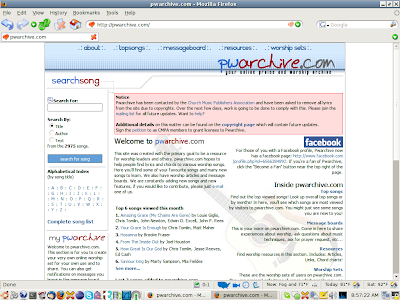 Posted by C. Michael Pilato at 1:59 PM No comments: