I'm in New York City for the Subversion Vision Conference. Follow my daily progress reports via the Submerged blog.

Posted by C. Michael Pilato at 6:02 PM No comments:

Another season of youth soccer is upon us. Gavin's decided to take up piano this season, but Aidan is happy to have moved up to Harrisburg Parks and Recreation's 5/6 age bracket, the first in which the kids get to play actual soccer games.

The two guys I coached with last season on Gavin's team — Darryl Strack and Bobbie Middleton — have moved up with their kids to the 7/8 age bracket and are coaching together again. I ran into them last weekend, where I learned that their team had chosen the name "Flaming Dragons". I had a lot of fun with these guys last Fall with our Soccer Monsters team, including designing a team logo which we had made up into stickers and iron-on patches. So when Bobbie asked me last Saturday if I'd be willing to do the same for their new Flaming Dragons team, how could I pass that up? When eating lunch later day, I scratched out a rough idea in crayon (on the table top at Supper Restaurant) for the logo: 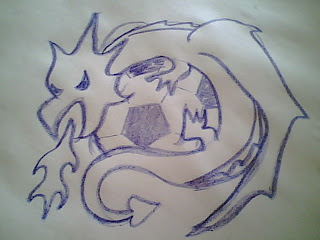 Then, I spent a few evening hours this week converting that simple drawing into a real vector artwork file:

Meanwhile, Aidan's team has chosen the name "Hot Lava". Not … really … sure what to do about that one just yet.