In our home, soccer is a staple (or, "Seeing God even when it hurts")

I had a great time last week in Berlin for Elego's Subversion Day event. I really like that city anyway, but to be able to hang out and code with so many of my fellow Subversion developers was just plain fun. Of course, the best part about any trip I take away from my family is when the trip is over. Well before my plane landed in Charlotte on Friday afternoon, I was already looking ahead: Saturday would bring my youngest son's soccer match as well as my own; Sunday held church and a church-wide picnic at a local park; and Monday was my oldest son's piano recital.

The first of those events was far more enjoyable than I even foresaw. My 5- and 6-year-old Comets played better than ever! Every last one of them was hungry for the ball, and it showed. They won their match 2-0, with my son scoring the first of the two goals. We had some time between that match and my own, so we celebrated with my friend and assistant coach Paul and his family at an area Japanese steakhouse. (Paul's son scored the other of the goals!) We've tried and failed to get together with this family several times recently, so it was nice to finally align schedules and enjoy the shared meal.

Now, my match was scheduled to begin at 8:30pm. Ordinarily, my wife and kids would not attend such a late match, as waking everyone up for church on Sunday morning is quite hard enough without us having the kids out at such late hours! But Paul's family was interested in taking in the match themselves, so my family opted to join them. It's always more enjoyable to play a sport when you have friends and family cheering for you, so this was a pleasant development. But it was at this point that the weekend took a turn for the unpleasant.

I play a central defender role for my team, and was more or less responsible for our opponents getting on the scoreboard first when I failed to intercept their striker's approach and ultimate shot. But then, a few minutes before half-time, it all got worse. Much worse. We conceded a corner kick to the other team, and when the kick came in, it came directly to me. I knew what was required: I had to head the ball away from frame and protect the goal. I did my job quite well this time. But unfortunately, our opponent's striker also went up for the header from behind me, and his eyebrow smashed into the back of my head. I didn't realize I was even injured. Someone said they saw blood, and I assumed it was that of the other guy. But as I turned to look, I felt that nasty warmth pouring down my face.

My team acted quickly to supply gauze and ice packs and even an unused jersey to mop up the mess that was pouring from my head. I wasn't lightheaded or suffering from a concussion — just gushing blood. The local urgent care centers were already closed for the night, so a half-hour later, I was in the emergency room. My wife Amy was with me, as was Paul, since neither Amy nor I was in any sort of shape to drive. My sons were with Paul's wife until Amy's parents could pick them up. Finally, four hours after the incident, I emerged with new hardware: six staples in the head. 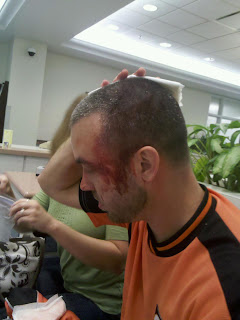 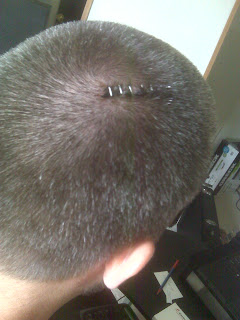 Some would look at this event and see tragedy. My oldest son saw something worse: I had asked him to pray for my safety before the match, and he'd forgotten to do so. And I confess that there are times when a bit of anger at the other team's striker wells up inside me. But even as it was all unfolding, I have no choice but to see God's protection and an opportunity to give Him glory. My wife should have been home with our sleeping children, but she wasn't — she was with me. Paul should have been elsewhere (after all, he'd never been able to come to any other of my matches), but he wasn't — he was with me. Statistically speaking, you should have been reading some other web page instead of this blog post, but you aren't — you figure it out.

Oh! As for the rest of the weekend: I gratefully helped to lead worship at church as usual (on just a few hours of rest), the picnic was a ton of fun (minus one admittedly frightening moment when a wooden boomerang managed to find its misguided way into my shoulder blades), and I look forward to my son's recital less than two hours from now.

As for me and soccer? Well, we're going to have to slow our relationship down a bit over the next few weeks. But I look forward to stepping out onto the pitch again for the Fall season.

Posted by C. Michael Pilato at 3:42 PM No comments:

Soccer logos for the big kids

In the past several months, I've been given the opportunity to whip up another pair of logos for area soccer folk.

The first was for the adult football club-in-the-large in my town (Harrisburg, NC, USA). I was tasked with putting something together that was stylistically similar to the logo for the popular Premiere League team Arsenal, but with green and gold colors. Originally, I was asked to incorporate a train image into the design (symbolic of our town's history as a stop along an old railroad route), but that didn't work out too well. I was able to salvage from those efforts the shield backdrop, but decided to replace the train with the somewhat-popular player-in-action silhouette (modeled after some stock photo shots of real players doing cool stuff). The result was accepted by those who commissioned it:

You might wonder about the white star on the design. As it turns out, Cabarrus County (in which Harrisburg sits) is roughly triangular in shape. So I added the star to represent Harrisburg's general location in that triangle, using the "swoosh" of the ball and the shield edges to form the triangle itself in the logo. Oooh... mysterious...

The second logo was for the adult soccer team I play on, the Orange Crush. I really had no ideas on where to take this one, so the team captain whipped out some rough sketches of what he had in mind when he asked for the design: 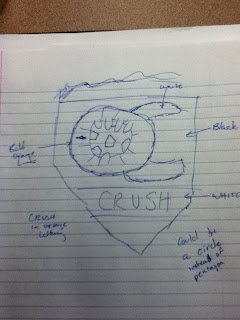 I implemented the ideas, with some minor modifications, and we were good to go:

It simply wouldn't do to not thank Israel Curiel, Rachael Curiel, and David Karpey for their creative input into these designs. So, thanks, guys!

Posted by C. Michael Pilato at 8:37 AM No comments: