Comets, by the numbers

Tonight, my Spring 2011 U7 soccer team — the Comets — had its end-of-season celebration. We congregated at the local CiCi's pizza (which was very accommodating to our party of thirty or so, by the way) for some food and a trophy presentation. As part of the event, I shared some facts about our season in a "by the numbers" format:

Personally, the highlights of the season are the ones not reflected in the numbers. It's been great to witness each player's improvement in terms of ball handling and understanding of the game. It's been great to share the coaching experience again with a close friend with a similar coaching philosophy. It's been great to see how my youngest son's love of the game and hard work has rubbed off on my oldest boy, providing the three Pilato guys another common interest.

Had I to do it again, would I change anything? Good grief, yes. That practice where the planned activity flopped and I didn't have a backup plan in mind already? Yeah, I'd do that differently. Those moments in heated matches where I didn't keep my cool? Yup, I'd just bench myself for those. My verbose evangelism on the coaches-only discussion forum about keeping the tournament focused on education rather than competition? Pretty sure those didn't earn me any friends. So, yeah. I'd change some things.

But my hope is that the kids were largely shielded from or oblivious to their coach's failures, and that next season, I'll be able to post one more statistic:

Posted by C. Michael Pilato at 7:35 PM No comments:

Happy birthday, Gavin, from an old geek to a new one

My oldest son, Gavin, loves science and technology. His love is not just at a "video games are cool" or "I want an iPod because everyone else has one" level. It's much deeper, almost like just needing to know how the world works — by what rules does the Universe play, and how can we use our creativity to bend them? While his overactive imagination can sometimes be a source of conflict in the home (or in the restaurant, or church, or public restroom, or …), his mother and I do recognize the beauty of it.

Gavin turns eight years old in … well, in about two hours from now, technically. I was trying to think of something special I could do for him, when it occurred to me to use one of his favorite toys/tools — Lego® blocks — to create a portrait of him. At a design level, this isn't really so challenging. I mean, it only took moments to load up a recent photo of him into the GIMP, shrink it, posterize it, replace its palette with one based around primary colors, etc. 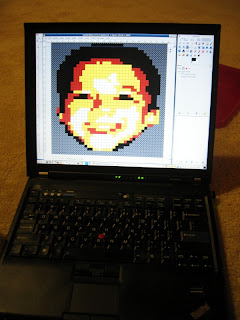 The result was a blocky image with Lego-ish colors whose aspect ratio had been adjusted to account for the fact that a 1x1 Lego block isn't square, but instead roughly 3:4: 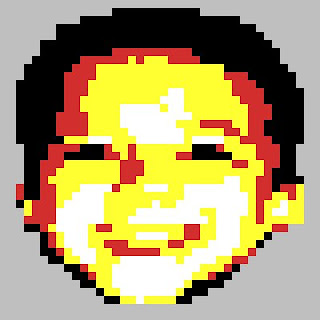 No, the difficult part was in actually building the thing! Okay, not difficult so much as tedious. And of course, I failed to inventory my available blocks before starting, so it was on a wing and a prayer that the hours-long activity began. But in the end, every piece planned was in place (minus some black shadow blocks on the bottom I decided to omit), and the work was complete. I had a roughly 14" x 18" image of my son, made out of plastic, to present to him tomorrow as a surprise. 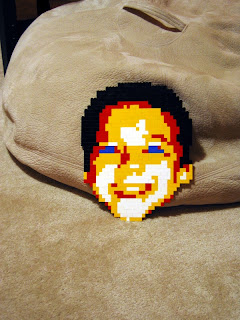 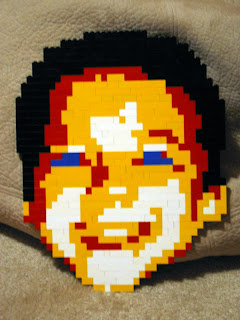