I admit that I can be easily distracted into any number of time-swallowing tasks of dubious universal benefit. The last time I had an airport layover, I succumbed to another such distraction — designing Subversion desktop wallpaper for my new-at-the-time laptop. I didn't have a long enough layover to do anything graphically groundbreaking, and I'm not quite distracted enough right now to bother generating fifteen images of various sizes and resolutions. But here's what I have — do with them what you will: 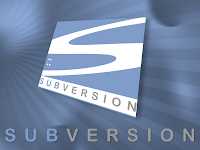 meme (mēm)
n. A unit of cultural information, such as a cultural practice or idea, that is transmitted verbally or by repeated action from one mind to another.

The word apparently finds its origins in the same sorts of places as the words "mimic" and "mime" (meaning "to copy; to imitate"). But I couldn't help but notice that it looks like "me me" without the intervening space. "me me" … two "me's" … "me too!" (sometimes represented as <aol/>). When it comes to Internet memes, I suspect my bogus etymology of the word reveals more about the motives behind these information transmissions than the Greek can offer.

The year change came to America

[If you think this post is about Barack Obama, you'll be sadly mistaken. This is my blog, by golly; Barack has his own.]

For Christmas, I got Amy something I'd wanted to get her for years: a couples devotional guide. We've each had our private times of Biblical study and prayer, but had never really formally had a dedicated daily time of joint reflection and discussion. So she was as thrilled as I expected when she unwrapped Moments Together for Couples (by Dennis and Barbara Rainey). This is a 365-day devotional. The entries are short — one page per day — with suggested discussion topics and a prayer guide. That seemed to me to be just about the right amount of effort to keep us interested without exhaustion, especially knowing that it would be at day's end when we'd likely be reading this thing.

On January 1, 2009, we read the first entry together. When we got to the suggested discussion topic, we got a lot more than we bargained for. What resulted was a two-hour long conversation that was really hard to have, but ultimately uncovered hidden expectations, disappointments, and wounds that we had no idea were present in our marriage.

Amy and I have always had a great marriage, but somewhere over the course of the past eleven years, small fissures had begun to form in the foundation of our relationship. The added weight of parenting and relocating from Chicagoland and stress caused by our church situation had exacerbated the problem. Fissures were becoming cracks of the worst kind — the kind that can't be immediately recognized on the surface. I don't believe we were at that moment at risk of catastrophe, relationship-wise. Our commitment to one another is non-negotiable and permanent. But it's a terrible thing to settle for "I do" or "I will" when "I will, and I really really want to" is within reach.

And so on January 1, 2009, the healing that comes from honesty, from openness, and from renewed devotion to one another and to God came to my marriage and, by extension, to America. I am having the very best year of my entire life. I feel like an entirely new man. I have immeasurably lower levels of stress, higher allotments of patience, and am finally learning to love as God wants me to love. I'm learning to trust God in ways I've never been able to before. And all those in my sphere of influence reap the benefits, too! How awesome is that?

Amy and I have faithfully attended to our devotional book every day of this year. We learned quickly that if we read and discussed immediately after putting the boys to bed (instead of just before we planned to go to sleep), we were much more likely to have enough energy to engage the discussion topics. We actually look forward to this time of our evening — it's one of the highlights of our daily routine.

Are there fissures, cracks, or full-fledged crumbling in the foundation of your marriage? I urge you — no, I beg you as a firm believer that a strong family is a strict prerequisite of a strong world — to invest dedicated attention to that problem. Talk to your spouse. Don't be afraid to lay everything on the line; to be completely vulnerable. Read books. Watch movies (such as the surprisingly fantastic Fireproof). And if your spouse won't talk to you, then talk to someone who truly understands the seriousness of the marriage commitment and can help you repair yours.