"All Around the World"

Recently, I had the opportunity to enjoy a short-term mission trip to rural China.  On the flights home, I was reviewing all that had happened on the trip, and thinking about the similarities and differences between the communities of believers in the very disparate places I'd been around the world over the past decade or so.  I began crafting a rally song of sorts, themed on the unity of worldwide believers.  A million-and-a-half hours later when I landed in Charlotte (or so it seemed ... that's just a rough estimate ...) I had mostly completed the song "All Around the World":

Let the redeemed of the Lord sing out.
Let every voice lift His praise up loud
And join the angels in heavenly shout
All around the world.

May the Spirit that guides us
Bind and unite us as one, as one.
A fabric woven together,
Enduring whatever to glorify the Son.
We'll sing of His love.
Sing of His love.

Posted by C. Michael Pilato at 1:39 PM No comments:

A couple of months ago, I was asked to design a trip T-shirt for my church's Dominican Republic mission trip. I was happy to help. There was only one problem: with only a couple of days before my deadline, no one could tell me anything about the trip or its theme!

Eventually, I was given a verse to work with — Colossians 1:16.


For in him all things were created: things in heaven and on earth, visible and invisible, whether thrones or powers or rulers or authorities; all things have been created through him and for him.

And I was told that the primary ministry work on the trip would be to teenagers hungry for apologetics.

Here's what I came up with for the main graphic, which was on the back of the shirt: 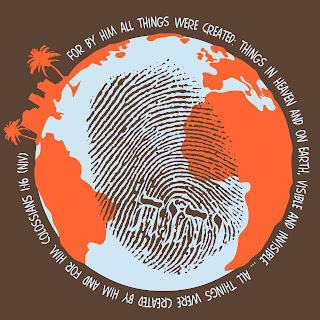 The idea here was to take the whole world, give the land masses a bit of texture and height, but highlight the Dominican Republic with some landmarks and commonly found palm trees.  But how to credit God with His creation? Then, I recalled a phrase I heard (or misheard, or misremembered, or...) long ago about "putting one's thumbprint on" something — that is, leaving your signature on something you've done.  From there, I had the idea to embed the Tetragrammaton into the thumbprint itself, clearing up any question about Whose mark it was that was left.

I used a simple event marker for the front-left chest print: 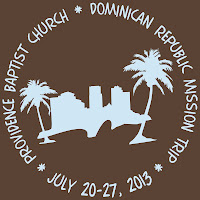 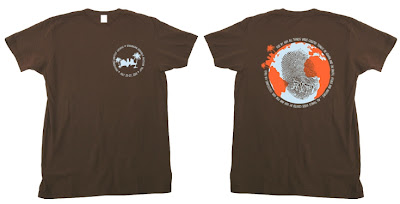 "Praise You All the Time"

As I drove to work this morning with Classical WDAV playing quietly (as is typical) on the car radio[*], I found myself singing aloud a new melody and lyrics.  I rushed into the building, dropped my laptop bag, and pulled out the voice recorder on my phone so I could capture "the moment".

During my lunch break, that "moment" developed into this:

Praise You All the Time
by: C. Michael Pilato

I'll praise You in the morning sun,
And praise You when the day is done,
When night falls, You're on my mind.
And even as I close my eyes
And bid another day goodbye
You'll find that I'm inclined
To praise You all the time.

I'll praise You in the morning sun,
And praise You when the day is done,
When night falls, You're on my mind.
And even as I close my eyes
And bid another day goodbye
You'll find that I'm inclined
To praise You all the time.

Praise to the Lord, the Almighty,
The King of creation.
O, my soul, praise Him
For He is thy health and salvation!

You're the Voice when all else goes silent.
You're the Calm when the seas get violent.

Tonight, I even quickly tracked a demo recording of the song so I could return later and develop sheet music. You can listen to it here:


I got a chance to play the new song for Amy (my wife) and Barbara (our music director at church), and both gave encouraging responses.  Barbara even helped me fix a short lyrical phrase I wasn't really happy with.

What do you think?  Can a church congregation pick up on it easily enough?  Will they be exhausted by the song's pace?

[*]  These days, "quietly" is the only reasonable option in my 16-year-old Saturn.  Alas, three of its four speakers are torn; the fourth doesn't work at all.
Posted by C. Michael Pilato at 12:50 AM 2 comments:

A few years ago, a woman in our church named Lynne spoke to me about how the Lord had laid on her heart the image of manna when considering how a mutual friend endured her bout with breast cancer and the treatment thereof. If you don't know, manna is a mysterious food substance God provided to the Israelite community for nutrition as they travelled through the wilderness en route out of Egyptian captivity. You can read the narrative in Exodus 16.

The key characteristic of this experience the Israelites had, though, was the fact that—barring exceptions made for the Sabbath—manna was provided daily, and lasted for but one day. If folks tried to gather too much and keep it longer than a day, it rotted. The takeaway here is that God is willing and able to provide what His people need for each day, on each day, but that some (great) measure of trust in His provision is required to overcome our human tendency to try to solve our own problems (often with miserable results).

Anyway, with this picture of manna in her mind, Lynne approached me to consider writing a song in honor of our mutual friend with manna as the theme. Now, if you asked me to list a hundred song topics I'd like to cover, I'm sure manna as a metaphor wouldn't make an appearance on the list at all! But God's provision is a pretty key theme in the life of the Believer. So I accepted her challenge, and more quickly than I expected.

After church that day, I rapidly changed into soccer gear in the restroom and flew out the door to a match I was probably going to be a little late for. As I drove down Harris Blvd., I recalled my conversation with Lynne. Almost instantly, the first half of a chorus melody and lyrics sprung into mind. I had to whip out my phone's voice recorder feature to capture the moment. As soon as I put the phone down, the other half of the chorus spilled out, causing me to grab for the phone again. (I promise I kept my eyes mostly on the road through all of this!) Anyway, before I had really put much effort into it at all, the song's melody, chorus, bridge, and verse outline were completed. I spent a few more weeks doing piddly little tweaks to the verse lyrics and chords, etc. But in the end, I had a song.

Give us this day our daily bread
and grace to face what lies ahead;
A humble spirit so we'll give
the credit where it's due.
We're asking not to win the war
but strength to fight just one day more
So when the victory comes, it's You.
Lord, it's You.

Lord, You're near to us, but it's mysterious
How You nourish us with manna from above.
It's not logical; it's a miracle
Lord, You're wonderful and worthy of our love!

I hope someday to post sheet music for this so that others can use the song if they care to. If you follow my blog (which is statistically very unlikely, but...) you'll know to expect that this work comes with very few usage restrictions, and why. Read the content of the license linked above for full details.

Posted by C. Michael Pilato at 6:34 PM No comments:

Part of my journey as a Christ-follower involves discerning how to apply the talents and spiritual gifts that God has given me (and/or allowed me to develop) toward the goal of serving Him and His people better. I love music, and enjoy making/playing/sharing it. I'm not a gifted lyricist, and over the years I've learned to understand and be (more or less) okay with that. But I've heard from a few different sources that it can be a lovely personal worship experience as well as artistic exercise to crack open the Bible and let the words therein be the lyric to whatever accompaniment springs up from within, and have enjoyed such experiences in the past.

The other night, the wife and I were having trouble falling asleep. For her, an accidentally consumed caffeinated beverage was most likely to blame. For me, it was a restless mind simply reeling with all the stuff I'd seen earlier in the day during a field trip to the Passages exhibit. So at 1:30am, I quit trying to sleep and headed over to my office/music room. I sat down with my Bible and my guitar, and then (I'm almost ashamed to admit) played a bit of "Bible Roulette" — semi-randomly choosing a chapter in the book of Psalms to read. Within a couple of minutes I was contributing to my wife's inability to sleep by playing and singing (somewhat loudly) a new melody to the slightly rearranged words found in the first part of Psalm 108:


My heart is sure, O God
I am secure, O God
With everything my soul will sing to You
I will awaken the dawn
Great are you, Lord, higher than heavens
Your faithfulness fills the skies
Be exalted, O Lord, above all the heavens
And let Your glory rise!

I first recorded the melody on my phone's voice recorder app. Then I moved to tracking a little demo on my computer. I toyed with the song all night long — adding and removing tracks, making minor adjustments to the chords for variety, fine tuning the melody, experimenting with harmonies, and really just swimming in the whole experience. Ultimately I did, in fact, "wake the dawn" with my rendition of the psalmist's words.

So... I'd made, I'd played, and now it's time to share. I'm posting sheet music of the song (which I've called I Will Sing To You (Psalm 108)) here for anyone who cares to download it. I've licensed the work under the Creative Commons Attribution 3.0 license. For those who are skittish about such things, let me spell out some of what this means. You don't need my permission to play this song, to share it in your own faith communities, or even to modify it to suit your own needs. And you certainly don't need to pay some CCLI royalty for performing it! Take it. Use it. May you or your family or your church or whatever celebrate by singing words that are pretty much straight from Scripture. After all, there is but one true Creator, and I suspect He loves to hear the text of His Word sung back to Him.
You can download lead sheets for I Will Sing To You (Psalm 108) from my GitHub repository. For those requiring an audible demonstration, you can listen to a demo recording.