In addition to getting to write about the forthcoming Subversion 1.7 release, I'll also get a chance to talk about it in an upcoming CollabNet webinar entitled "Subversion 1.7 — Why You Should Care". To sign up for this free webinar, visit the registration page below:

Posted by C. Michael Pilato at 1:57 PM No comments:

I was recently given the chance to write an article for Dr. Dobbs about the forthcoming major release of the software that I spend my days (and some nights, too) working on. If you are interested in version control systems in general or Apache™ Subversion® specifically, or perhaps just enjoy long, dry reads about software used primarily by other software hackers, you can check out my article at http://drdobbs.com/open-source/231500282.

Posted by C. Michael Pilato at 1:52 PM No comments:

Another season of soccer is upon us. Another batch of eager young athletes. Another few months of practices, matches, and all the hard work of preparing for both. And... another logo!

This year, my youngest son's team has black and white jerseys. Because of the recent popularity of the so-titled film around my house, we started off with the name "Kung Fu Pandas". But the re-use of a trademarked name was uncreative. So after consultation with my assistant coach, we rechristened the team as the Kickin' Pandas. (We did, however, keep the "1 ... 2 ... 3 ... skidoosh!" post-game chant!)

As usual, I started with a hand-drawn sketch. (The restaurant whose paper tablecloths I used to use for this task is now closed, so I had to settle for a sheet of notepad paper.) 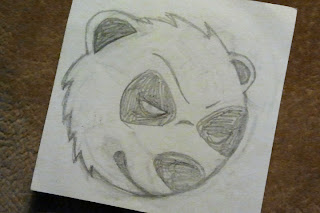 From there, I went to work on the digitization step, using OpenOffice Draw as usual because I'm too much of an amateur and cheapskate to go with industry standard tools.

Then, an unexpected blessing: a fellow coach and friend in a different age bracket happened to choose the same name for her team, and was interested in getting iron-on patches made up, too. With her sharing the cost of the patches, the economics of the whole thing was no longer ridiculous. So we ordered the patches, which arrived today! 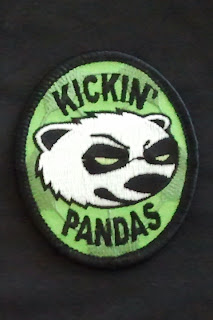 Thanks (yet again) to the folks at TJM (aka patches4less.com) for the great patch creation work!

Posted by C. Michael Pilato at 3:21 PM No comments: