As I compose this, I'm 38,000 feet above sea level and somewhere between Charlotte and Denver, en route (ultimately) to this year's U.S. Apachecon event. Seems it was just yesterday that I was flying home from my last conference event. Perhaps that's because it was just a few days ago that I passed through Customs in Charlotte after the lengthy flight home from Munich, Germany. I'd been in Munich for the third SubConf Subversion user conference. I've had the pleasure of attending the prior two years as well, and this year's event was again a enjoyable one.

After helping to coach Gavin's soccer team to an 8-1 victory last Saturday, I hurried home, grabbed my bags, and was off to the airport. My direct flight from Charlotte to Munich landed Sunday morning around 8:30am local time. A couple of train rides and a short walk later, I was checking into the B & B Hotel, where (I was told) "all the cool kids" — that is, some fellow Subversion developers — were staying. I spent Sunday afternoon getting settled into the hotel and resting, then met up with Hyrum Wright for the express purposes of reprising last year's trip to Berni's Nudelbrett and to plan how we'd invest our time on Monday.

Hyrum and I decided on a trip to Salzburg, Austria for our Monday outing. It was two hours away by train, so we caught the earliest one we could manage. While in Salzburg, we visited the Hohensalzburg Fortress (an 11th-century fortress that overlooks the city), the Residenz State Rooms, Mozart's birthplace, and some other spots in the city. Afterwards, we took a bus out to the town of Grönig, where we rode the Untersberg Cable Car up into the mountains. Wow! Suspended above the earth by a wire the thickness of my forearm, watching as rocky crags passed underneath, I was overwhelmed by the novelty of it all. This was not a normal day in the life of Mike Pilato, to say the least. Our train back to Munich got us in town in time for dinner, which we took at one of the city's many beerhouses. (Thankfully, the locals don't take it too personally when we tourists opts for Coke and Fanta.)

I returned to the hotel around 10:00pm, where two things were waiting for me: a group of Subversion developer colleagues, and a nasty surprise from the SubConf event organizers. It seems that an employee of Polarion who was slated to present an all-day Subversion workshop the following day (Tuesday) fell ill, and then made the poor decision to use email — nice, asynchronous, non-interrupting, unacknowledged email — as his medium for telling the event organizers that he had to bail on the workshop. By the time they realized that they had no one to present the workshop, the organizers had to scramble for assistance. They found me online and asked if I could present the workshop instead. I was completely unprepared to do so, but offered to help as best as I could.

Fortunately, things took a turn for the better when I then went down to the lobby to meet up with my colleagues. While I was bemoaning this situation and my lack of preparedness, the angel Michael — no, not that one; Michael Diers (from Elego) — offered to assist me for the first half of the day-long workshop and to take over entirely in the latter half. And as if that wasn't great enough, I was then presented with the finished results of the T-shirt I designed for the conference: 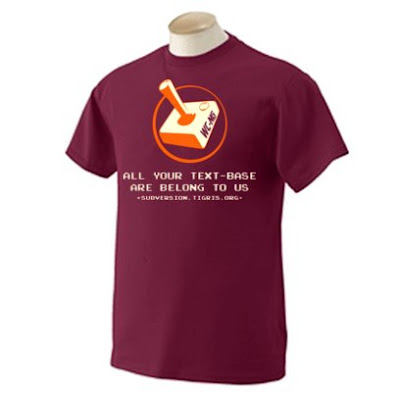 Tuesday's workshop went pretty well, actually, thanks largely to Michael's familiarity with the topic and ready-on-hand materials. After lunch I was finally able to meet up with several other Subversion developers in a room the conference organizers had arranged for us to occupy for hackathon purposes. We worked for a few hours before heading over to participate as a panel in a Developer Roundtable event — an hour and a half of face-to-face interaction with Subversion users and administrators interested in learning more about Subversion's upcoming features or in solving particular Subversion problems they were having. I love these events for the fact that they serve to remind me that at the other side of every bug report or feature request is another human being who isn't just trying to make work for us as developers but is merely trying to get stuff done.

Wednesday morning, I delivered my keynote presentation, The Subversion Legacy (So Far...). I took the attendees on a brief walk through Subversion's history, beginning with its instantiation as an open-source project by CollabNet and continuing through to the current day, and focusing on aspects of the community and of key events and decisions which have contributed to Subversion's success. Despite the language challenge (most of the attendees were more comfortable communicating in German), I got positive feedback. And with that completed, I was in the clear in terms of obligations to the conference, and joked that I was now able to return to my typical 40% stress level.

I spent the rest of Wednesday and most of Thursday working on Subversion itself in the hackathon room with the other developers. We had occasional breaks to take in presentations by our peers, but mostly spent the time trying to improve the very software that the conference existed to celebrate. Thursday night those of us that remained went to dinner in Munich, sharing a final last few minutes together. A casual onlooker would never guess that we live scattered across the globe, only occasionally seeing each other in person. (In fact, I met one of my CollabNet colleagues for the first time on this trip!)

I traveled to the airport Friday morning with Greg Stein, hopped onto my plane bound for Charlotte, and was fortunate to sleep two-thirds of the flight away. I was greeted in Charlotte on Friday afternoon by my incredible, amazing wife and children. The opening theme of my keynote was about gratitude, and gratitude for good friends and a loving family served as the bookend to that week-long trip to Germany.