Youth soccer season is here again, and my youngest son couldn't be happier. His team (and seventeen others in his age bracket!) will take the field this Saturday as the first matches of the Harrisburg Parks and Recreation Fall 2010 Youth Soccer season take place. Okay, I confess — I'm pretty excited, too. This is my first season as a head coach in this age bracket, but I've assisted at this level for two years now. I easily have as much fun as the kids do!

This season, our team chose the name "Shooting Stars" (which was actually suggested by my wife), and as has become the routine, I managed to squirrel away 30 seconds to whip up a general logo design (once again composed on the table cover at Supper Restaurant) and then a couple of hours of digitization time.

… and the sketch that served as its humble roots: 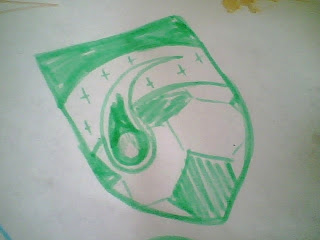 UPDATE 9/7/2010: My patch order is in. Once again, the fine folks at Team Jedi Marketing have done a great job with the order: 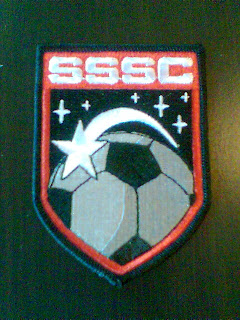